How Long Does a Basketball Game Really Last? 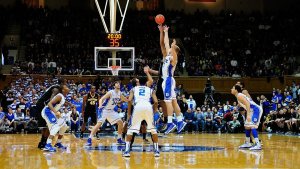 We get asked many times these little questions about the game of basketball. They don’t always require a single article to answer the question, so for this article, we decided to answer a few to keep everyone happy.

So, let’s dribble right along to the first question…

How Long is a Basketball Game?

A basketball game is a different length of time depending on whether you’re just playing a pick-up game with friends, playing at college or in the actual NBA with regulation where it’s different again.

A basketball game is broken down into actual on-the-court game time and other times.

The playing game is usually comprised of four quarters. This is similar to how other sports are commonly often broken up into halves or quarters too. This gives the players a chance to rest and in many sports, this commonly reverses the direction of play after the break in play.

For NBA games, they have 48 minutes of regulation play. This is broken down into 4 quarters of 12 minutes each. Therefore, this is the most basic answer to this question. And now this is where we make this more complicated. 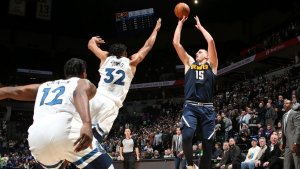 Just like in some other sports, there are timeouts where the game play pauses. In basketball, there are usually 6 timeouts. Four of these with NBA games is due to a need for short TV advertisements for revenue generation during the break; the other two are just part of the regulation game structure.

Postseason, things also change. In this situation, there tend to be a greater number of fouls when shooting at the hoop. Also, more player substitutions to try out different players and remove one or more from the court. Doing this allows players who didn’t get a chance to play many games to rotate in during the postseason to get some game experience and to remain “game ready.”

Due to these variances, seasonal games and postseason games last a different amount of time. Typically, an NBA game during the season will last 137 minutes overall, though this does vary a bit. With postseason games where there are more stoppages for various reasons, the average game lasts 160 minutes instead.

Also, for the NBA finals, they are even longer events and can run for a total of three hours.

By contrast, the International Basketball Federation (FIBA) or Olympic basketball games don’t last the same amount of time as an NBA game. This is to be expected as they’re international in nature, rather than specifically based in the USA.

With both the Olympics and the FIBA, there are the same four quarters, but their duration is a noticeably shorter 10 minutes (not 12 minutes). Because of this, the total gameplay on the basketball court is 40 minutes and not 48 minutes.

They may also see timeouts, player substitutions and other delays that extend the total length of a game. However, there isn’t a consistent basketball game duration for either the Olympics or the FIBA. Nevertheless, it should be somewhat similar to the total time of an NBA game, especially if televised.

How Long is a Basketball court?

With a basketball court, they vary a little bit between the regulation size in the NBA and the rules under the International Basketball Federation (FIBA).

For the NBA, the length of a basketball court is 50 feet. It must actually measure 94 feet from one side of the court to the other and 50 feet from one end to the other. For the metric people, that’s 28.7 meters by 15.2 meters.

Most U.S. colleges tend to stick to the regulation court length for basketball courts. This is due to some of the players going onto play in the NBA, so using the same court size is beneficial there. It’s also because the average age of the players is older and so the court size doesn’t present a problem from a stamina perspective.

Now with the FIBA, it’s different again. There are complicated reasons why. Essentially, despite there being an established court length and width in America, elsewhere they use the metric system. Because of this, they decided to make the courtside round up to the nearest meter. As a result, the length is not the same.

With amateur basketball courts, they don’t have to stick to regulation sizes in the U.S. or Europe. Indeed, their size varies considerably, so it’s not unusual to see basketball courts that are truncated. This is especially true for children’s courts where they tend to be much smaller.

Length of a College Basketball game?

For college basketball, different rules are applied for the duration of the game. It’s also broken up differently too.

There aren’t four quarters. Instead, there are just two halves. Each half has a duration of 20 minutes (which if they were quartered would match the FIBA and Olympic quarter duration of 10 minutes a piece). Therefore, for a college regulation game, the time on the court is 40 minutes in total.

Female college ballers have slightly different rules. So, they get the NBA tradition of four quarters to allow them to have more rest between periods of gameplay.

Additionally, there is the halftime which breaks up each half. This lasts just 15 minutes.

How long is Halftime In Basketball?

During this break period, players get to rest, rejuvenate and receive some much-needed input from the coaching staff.

How many periods in basketball?

The periods vary between the NBA and college basketball. Whether playing in quarters or halves, they are also known as periods with breaks in between each period. 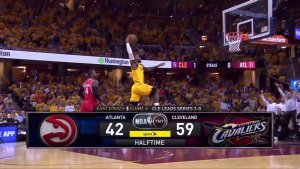 How long does a basketball game last?

There is no fixed time because basketball games are somewhat unpredictable with the team’s coach making decisions on the fly based on the game play on the court and what decisions are required.

How many quarters in basketball?

For the NBA, there are four quarters in a game of basketball.

With college basketball, there are usually two halves (not quarters) for male ballers and four quarters for female ballers. Women get more breaks to enable them to rest and recover between gameplay.

Game play sections are also known as periods. Therefore, whether a basketball game is played with quarters or halves, these are still counted as periods.

Usually, during the halftime period, the players can sit and relax while they refuel with some fruit and electrolyte drinks. During this time, the coach summarizes how the game is going so far and gives the players a pep talk to gee them up for the rest of the game. Sometimes, these pep talks are so legendary that teams have gone back on the court with a renewed sense of determination and turned a losing game completely around.

The NBA quarter length is 12 minutes. This differs from the FIBA and the Olympics where they only play in 10 minutes quarter durations.

The total time on the court may get extended due to player substitutions, fouls stopping play and so on. Players are not active during this time. As such, while the quarter length is fixed, other factors mean games do indeed last longer than 48 minutes and you should plan accordingly. 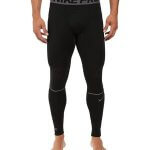